Many consider serial killers a thing of the past.  This is partially due to the most known, Gacy, Bundy, etc are from the 70s and early. However, the 80s and 90s also saw some of the worst people killing.  So are there still serial killers out killing?  Yes, there are, and the numbers are actually surprising.  You would think that with the internet and communication the way it is, there would be none.

According to the Kelleher Typology, female serial killers can be divided into five groups: Black Widows (women who kill husbands or other companions and family members), Angels of Death (women in caretaker positions who murder individuals in their care), Sexual Predators (Wuornos, who worked as a prostitute while carrying out her crimes, is the only identified example), Revenge Killers (women who systematically kill out of hate or jealousy) and Profit Killers (women who kill for financial gain).

There are four categories that serial killers fall into. Visionary, mission-oriented, hedonistic and power or control; however, the motives of any given killer may display considerable overlap among these categories.

Visionary serial killers suffer from psychotic breaks with reality, sometimes believing they are another person or are compelled to murder by entities such as the Devil or God.The two most common subgroups are “demon mandated” and “God mandated”.

Herbert Mullin believed the American casualties in the Vietnam War were preventing California from experiencing the Big One. As the war wound down, Mullin claimed his father instructed him via telepathy to raise the number of “human sacrifices to nature” in order to delay a catastrophic earthquake that would plunge California into the ocean. David Berkowitz (“Son of Sam”) is also an example of a visionary killer. He claimed a demon transmitted orders through his neighbor’s dog and instructed him to commit murder.

Mission-oriented killers typically justify their acts as “ridding the world” of a certain type of person perceived as undesirable, such as gay or lesbian people, prostitutes, or people of different ethnicity or religion; however, they are generally not psychotic. Some see themselves as attempting to change society, often to cure a societal ill.

This type of serial killer seeks thrills and derives pleasure from killing, seeing people as expendable means to this goal. Forensic psychologists have identified three subtypes of the hedonistic killer: “lust”, “thrill” and “comfort”.

Sex is the primary motive of lust killers, whether or not the victims are dead, and fantasy plays a large role in their killings. Their sexual gratification depends on the amount of torture and mutilation they perform on their victims. The sexual serial murderer has a psychological need to have absolute control, dominance, and power over their victims. Torture, pain, and ultimately death attempts to fulfill their need.

They usually use weapons that require close contact with the victims, such as knives or hands. As lust killers continue with their murders, the time between killings decreases or the required level of stimulation increases, sometimes both.

Kenneth Bianchi, one of the “Hillside Stranglers“, murdered women and girls of different ages, races and appearance because his sexual urges required different types of stimulation and increasing intensity.

Jeffrey Dahmer, who was repeatedly diagnosed with borderline personality disorder, searched for his perfect fantasy lover—beautiful, submissive and eternal. As his desire increased, he experimented with drugs, alcohol, and exotic sex. Dismemberment of victims showed an increasing need for stimulation. Their heads and genitals he preserved, and by his attempts to create a “living zombie” under his control (by pouring acid into a hole drilled into the victim’s skull). Dahmer once said, “Lust played a big part of it. Control and lust.

Once it happened the first time, it just seemed like it had control of my life from there on in. The killing was just a means to an end. That was the least satisfactory part. I didn’t enjoy doing that. That’s why I tried to create living zombies with … acid and the drill.” He further elaborated on this, also saying, “I wanted to see if it was possible to make—again, it sounds really gross—uh, zombies, people that would not have a will of their own, but would follow my instructions without resistance. So after that, I started using the drilling technique.” He experimented with cannibalism to “ensure his victims would always be a part of him”.

The primary motive of a thrill killer is to induce pain or terror in their victims. This provides stimulation and excitement for the killer. They seek the adrenaline rush provided by hunting and killing victims. Thrill killers murder only for the kill; the attack is usually quick, with no sexual aspect. Usually the victims are strangers, although the killer may have followed them for a period of time.

Thrill killers can abstain from killing for long periods of time and become more successful at killing as they refine their murder methods. Many attempt to commit the perfect crime and believe they will not be caught. Robert Hansen took his victims to a secluded area, where he would let them loose and then hunt and kill them. In one of his letters to San Francisco Bay Area newspapers, the Zodiac Killer wrote “[killing] gives me the most thrilling experience it is even better than getting your rocks off with a girl”.

A surviving victim described Coral Watts as “excited and hyper and clappin'”. That this was gonna be fun during the 1982 attack. Slashing, stabbing, hanging, drowning, asphyxiating, and strangling were among the ways Watts killed.

Material gain and a comfortable lifestyle are the primary motives of comfort killers. Usually, the victims are family members and close acquaintances. After a murder, a comfort killer will usually wait for a period of time before killing again. This is to allow any suspicions by family or authorities to subside. They often use poison, most notably arsenic, to kill their victims. Female serial killers are often comfort killers, although not all comfort killers are female.

Dorothea Puente killed her tenants for their Social Security checks and buried them in the backyard of her home. H. H. Holmes killed for insurance and business profits. Professional killers (“hitmen“) may also be considered comfort serial killers. Richard Kuklinski charged tens of thousands of dollars for a “hit”, earning enough money to support his family in a middle-class lifestyle. 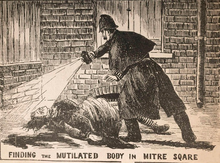 A policeman discovering the body of prostitute Catherine Eddowes, one of Jack the Ripper‘s victims

The main objective for this type of serial killer is to gain and exert power over their victim. Such killers are sometimes abused as children, leaving them with feelings of powerlessness and inadequacy as adults. Many power- or control-motivated killers sexually abuse their victims, but they differ from hedonistic killers in that rape is not motivated by lust (as it would be with a lust murder) but as simply another form of dominating the victim. Ted Bundy is an example of a power/control-oriented serial killer. He traveled around the United States seeking women to control.

This site uses Akismet to reduce spam. Learn how your comment data is processed.